The enigmatic self-proclaimed “creative force” behind most of the music produced on earth over the past several eons. Doc has super powers, such as being able to listen to the “Lost Discs Radio Show” through his wood-grained Pioneer SX 450 located in his basement, while in his backyard watching his mulching pile decompose. In his spare time, he enjoys taking entire vintage automobiles apart, and then putting them back together in the exact same way they originally were before he took them apart. One of Doc’s early influences was his grandfather, Rev. Doctor Doc Brown who coincidentally is also his namesake, and wrote the lyrics to the 1912 classic “I Wanna Dance Soooo Bad”. Because his brother was also named after grandpa, and Doc’s dad’s name was Bubba Brown, our Doc’s official moniker is The Honorable Doctor Doc Brown Jr. III, MBSA. Doc loves trivia, and is hoping to get a segment of his own on the show titled “Stump the Doctor Good” In fact, he has a question for you. The first person to email what the title MBSA stands for will receive a special prize, and mention on the show. Here’s a hint: He really means that last part. 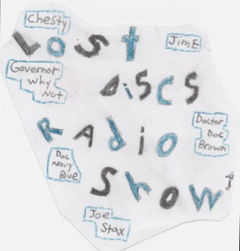